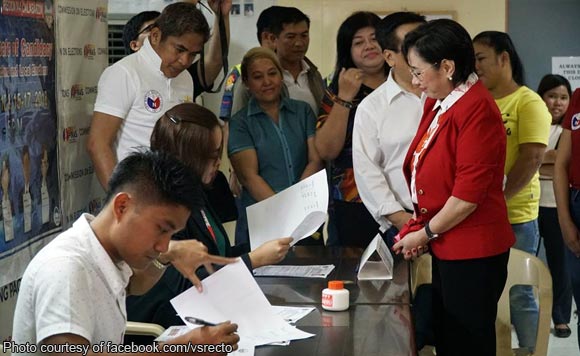 BATANGAS CITY – Lipa City’s celebrity lawmaker Vilma Santos Recto has finally ended some political parties’ move to draft her for a Senatorial slate as she joined on Thursday scores of Batangas legislators and local politicians in filing their certificates of candidacy at the Commission on Election (Comelec) provincial office here.

As incumbent Batangas 6th District Representative (lone district of Lipa City), Ate Vi was in high spirits, accompanied by her Senator husband Ralph Recto, in filing her COC for a second term.

Political observers here assessed the “Star for All Seasons” could be a shoo-in for a higher post after the celebrity politician had served as three-term Batangas Governor and as Lipa City mayor, also for three consecutive terms prior to her current elective post.

With some supporters and party affiliates, fans and curious crowd gathered at the grounds of the provincial Comelec office at the Capitol compound here.

Orense said they have deputized authorities to tighten security and institute systematic and orderly procedures in the filing of the COCs at the provincial poll body’s office.

Other incumbent Batangas Representatives who also filed their COCs seeking reelection in their current Congressional districts in the province were Ma. Theresa V. Collantes for the 3rd District, and Elenita R. Ermita-Buhain for the 1st District.

Aspirants for seats in the Batangas Provincial Board or Sangguniang Panlalawigan (provincial legislative council) who filed their COCs include former Board Member Consuelo Malabanan in the 1st District and another former Board Member Rudy Balba who is staging a comeback in the 3rd District.

Meanwhile, the provincial Comelec supervisor here reminded political aspirants that they have until Oct. 17 (Wednesday), except Oct. 13 (Sat) and Oct. 14 to file their COCs from 8 a.m. and 5 p.m. (PNA)