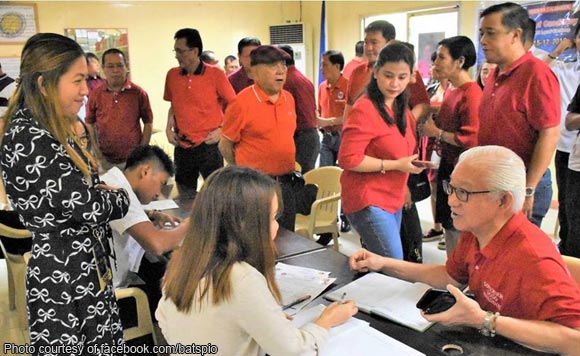 BATANGAS CITY – Incumbent Batangas Governor Hermilando I. Mandanas filed Thursday his Certificate of Candidacy (COC) for reelection in the May 2019 mid-term elections.

Jenelyn A. Aguilera, Batangas Public Information Office chief, said Mandanas was accompanied by his supporters in red shirts when he filed his COC at the Batangas provincial office of the Commission on Elections (Comelec) at the Capitol compound.

After the COC filing, the Batangas governor assured constituents of his decision to run anew and dispelled speculations that his wife, lawyer Gina Reyes Mandanas, or incumbent 2nd District Congressman Raneo Abu, would be succeeding him.

Aguilera said the incumbent Batangas governor also brushed aside rumors his wife would be a substitute candidate because she is a registered voter in Marinduque.

Mandanas added that he is a member of the PDP-Laban while Rep. Abu belongs to the Nacionalista Party.

He also vowed to continue the development projects in the province, particularly on health services, education and boosting the economy of the province through his governance thrust on “HELP” which stands for Health, Education, Livelihood and Protection of Life, Property and Environment Program.

Mandanas was Batangas Governor from 1995 to 2004 before serving three terms as Batangas 2nd District Representative. He staged a comeback qw governor in 2016. (PNA)