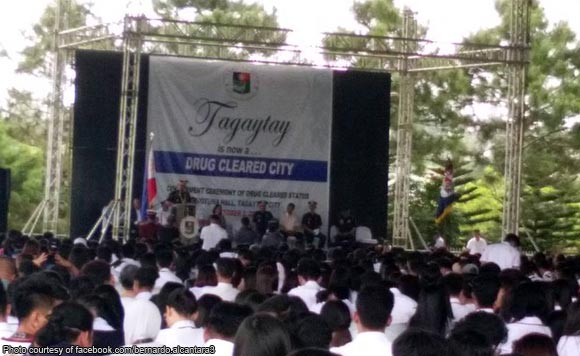 TAGAYTAY CITY, Cavite — This top highland tourist destination in Cavite province is now a “Drug-Free City,” following the conferment by the Philippine Drug Enforcement Agency (PDEA) in formal rites at the Tagaytay Convention Center on Tuesday.

Mayor Agnes Tolentino rallied constituents to sustain this “very positive development” and honor for the city.

Tolentino addressed thousands of students, city folks, barangay and city officials, who, she said, “have every reason to celebrate freedom from illegal drugs”.

The declaration was based on the city’s compliance with the requirements set under Section 8 and 11 of the Dangerous Drug Board (DDB) Regulation No. 3, Series of 2017, entitled “Strengthening the Implementation of Barangay Drug Clearing Program.”

Seeing the award more as a challenge, Segun encouraged the city police to further intensify its efforts to sustain the “drug-free” status.

“Otherwise, PDEA will recall it,” he said.

The city government also distributed the “Drug Cleared” tag to its 34 barangays during the awarding rites. (Dennis Abrina/PNA)