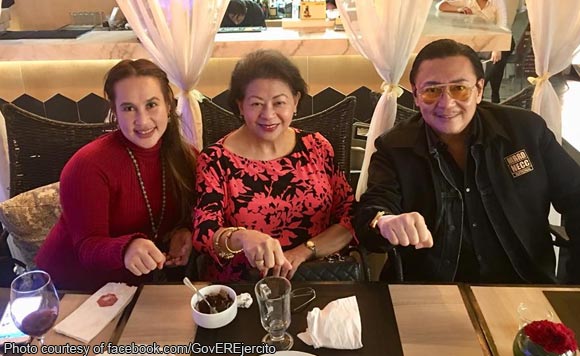 So vengeance is theirs?

Former Laguna Gov. ER Ejercito, an ardent supporter of President Duterte, attended what he termed as the “justice victory celebration for the victims of Noynoy Aquino/ Lourdes Sereno.”

The group was apparently celebrating the recent ouster of Sereno as Chief Justice through the granting of a quo warranto petition filed by Solicitor General Jose Calida.

Then President Aquino had named Sereno to replace Corona after the latter was found guilty by the impeachment court for failing to make a full disclosure in his statement of assets, liabilities, and net worth.

Ejercito shared photos from the party on his Facebook page, including one where he and Corona’s wife were doing the signature Duterte pose.

Is this tit for tat?