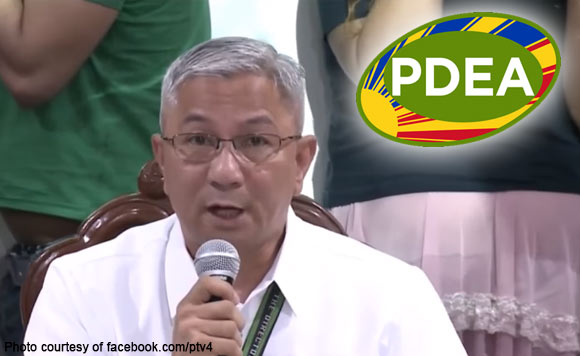 The discovery of the two illegal facilities in Batangas and Malabon was the result of the intelligence support provided by the Office of the National Narcotics Control Commission (ONNCC), Narcotics Control Bureau of the Ministry of Public Security, and the People’s Republic of China to PDEA.

Aquino said the public should beware of these signs of a a clandestine shabu laboratoryin the neighborhood:

-Sudden presence of individuals, either local or foreign nationals, in buildings or residence which are abandoned for a long period of time;

-Thick electrical wires for houses or facilities instead of normal-size wires:

-Laboratory materials surrounding the property like empty chemical bottles, drums and other kind of chemical containers;

-Persons in the premises seldom come-out, or they do come out to smoke to avoid igniting the chemicals inside;

-Excessive or irregular water waste coming out of the premises;

-Residents who burn their trash instead of discarding them;

-Use of security cameras;

-Heavy security like the presence of watch dogs, high fences and barbed wires;

-Every opening of the facility is covered or tinted;

-Persons going about their business at odd hours;

-No traffic during daytime, but on wee hours; and

He appealed to the public to report any suspicious movement of individuals and facilities in their neighborhood through “Operation Private Eye” with contact number (02) 920-0967, andv via e-mail at iis.pdea@yahoo.com.

“The public can report illegal drug activities, and in return, PDEA ensures the anonymity of the informant and the confidentiality of the information provided to counter fear, which hinders the active participation of the citizenry in reporting. The informants are given reward and incentive scheme designed to encourage the public to report illegal drugs activities in their community”, Aquino noted. (PNA)