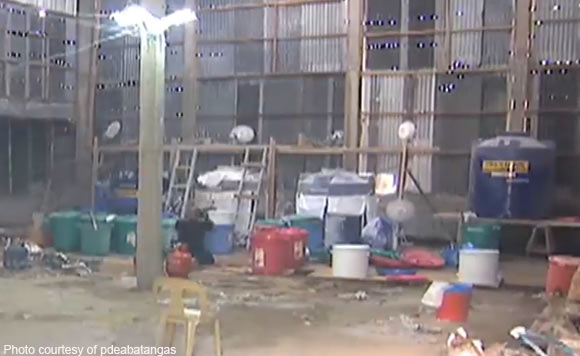 The Philippine Drug Enforcement Agency (PDEA) on Thursday dismantled a clandestine laboratory used in manufacturing shabu and ecstasy and arrested five suspects inside a farm in Batangas.

“The shabu laboratory has the capacity to produce 25 kilos or P125 million worth of shabu in one day,” Aquino said.

The discovery of the laboratory was the result of the intelligence support provided by the Office of the National Narcotics Control Commission (ONNCC), Narcotics Control Bureau of the Ministry of Public Security, People’s Republic of China to PDEA.

“A tip-off from ONNCC was first relayed to PDEA International Cooperation and Foreign Affairs Service (ICFAS) that Chinese chemists are flying in and out of the country from September to October 2017,” Aquino said.

A bilateral intelligence and investigation meeting between PDEA and delegates from the ONNCC was held on Feb. 23 in the Philippines where the initial details of the joint operation were discussed. The ONNCC delegates made a return trip to the country and stayed until the discovery of the shabu laboratory.

According to Aquino, one Chinese national believed to be the chemists’ handler/manager returned to the country, particularly in Cebu City, from Guanzhou, China last February 24.

“He took a ship to Manila where he reportedly visited a suspected shabu laboratory in La Union and stayed temporarily in Tagaytay City,” he said.

“Three more Chinese chemists arrived in Manila from Jinjiang, Fujian Province, China on March 6, 2018. Straight from the airport, they were fetched by the same guy, a Chinese national who also fetched the chemists’ handler, and proceeded to Tagaytay City where the latter is staying,” Aquino added.

“Hours later, a follow-up operation was immediately conducted by the same operating unit in Merry Homes, Barangay Francisco, Tagaytay City which led to the arrest of Xie Jiansheng, the Chinese organizer and handler of the arrested chemists, and the confiscation of 500 grams of suspected shabu worth PHP2.5 million,” the PDEA chief said.

Seized pieces of drug evidence were brought to PDEA Laboratory Service for qualitative and quantitative examination, while the arrested suspects are presently under the agency’s custody.

Chinese chemists Baoquan, Zixing, Dy and Jiansheng, who together put up the shabu laboratory, in collusion with their Filipino cohorts, are connected to the infamous “Golden Triangle”– notoriously known as the world’s foremost drug-producing region operating near the borders of Thailand, Laos and Myanmar.

According to Chinese intelligence reports, the shabu and ecstasy-producing laboratory was organized by a Hong Kong-based drug kingpin/financier.

“On behalf of the PDEA and the Philippine government, I would like to express our gratitude to our Chinese counterparts for their intelligence support and cooperation as we vowed to protect our nation from the threat of illegal drugs,” Aquino said.

The operations are an outcome of the revitalized cooperation and collaboration between Chinese and Philippine drug law enforcement authorities after the state visit of President Rodrigo Roa Duterte to China in October 2016.

During the said visit, PDEA and ONNCC signed the Protocol On Cooperation on intelligence sharing and joint anti-drug operations. (PNA)