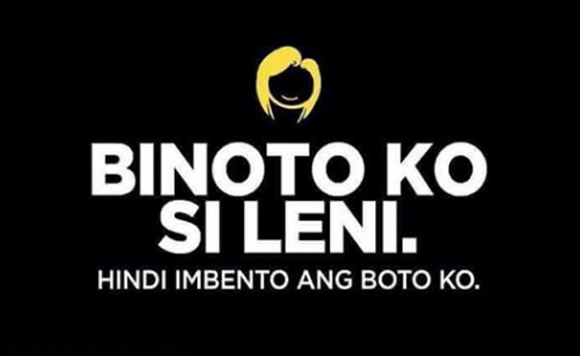 As the Presidential Electoral Tribunal begins its recount of the votes for Vice President, San Pablo, Laguna Councilor Karla Adajar has made clear where she stands.

Adajar updated her Facebook cover photo to stand up and assert that she voted for Robredo, and that her vote for her was not a figment of one’s imagination.

“Binoto ko si Leni. Hindi imbento and boto ko,” the text on her cover photo stated in white letters before a black background.

Former Sen. Ferdinand Marcos Jr. is contesting Robredo’s victory, claiming that there was cheating in the 2016 polls where Robredo won with a margin of some 200,000 votes.

Robredo has filed a counter-protest.

Adajar’s update of her Facebook page drew comments from fellow Robredo supporters attesting to the fact that they voted for her.