Unacceptable: Duque orders Cavite hospitals to explain refusal to treat Dengvaxia patients, one of whom died 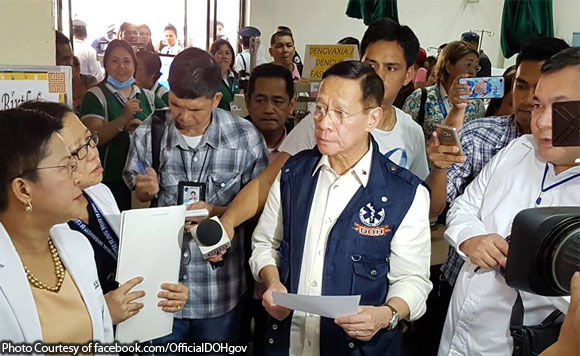 Department of Health (DOH) Secretary Dr. Francisco Duque III will send “show cause orders” to the hospitals he visited here Wednesday to explain why they should not be charged for negligence and other violations for not admitting Dengvaxia patient.

Duque III visited four of the six hospitals on Wednesday afternoon after receiving reports that Dengvaxia children patients were allegedly refused admission to the hospitals.

One of the victims was a 12-year-old girl who was passed on from one hospital to another until the girl was suspected to have died from illness triggered by the Dengvaxia vaccine, at the Dela Salle University Medical Center in this city, where she was finally admitted.

Duque conducted ocular inspections and site visits, as the media convoy tailed the DOH secretary’s vehicle to the four hospitals.

On his visit at the government-run Emilio Aguinaldo Memorial Hospital in Trece Martires City, Duque was visibly displeased when he met with the doctors and officials and toured the hospital facilties.

The Secretary was earlier told that on June 2016, the 12 year-old Dengvaxia-vaccinated patient Riceza Salgo suffered the ordeal from being transferred to around six hospitals by her already distressed mother over the insensitive treatment and circuitous process.

It was learned that Salgo was first brought to the Padua Clinic then to Tagaytay Hospital, and then to the Gen. Emilio Aguinaldo Memorial Hospital in Trece Martires City.

In m his inspection at the Aguinaldo Memorial Hospital, Duque found out the hospital’s refusal to admit the child-patient victim Salgo was due to lack of bed.

The Secretary told the hospital staff to observe due diligence and directed them to show their concern to any patients, most especially the poor.

“You can do something to admit the patient if there was no available bed, you can put the patient to an emergency room if there was bed vacancy or get a bed somewhere in the hospital,” a visibly irked DOH Secretary told hospital officials.

Duque also reminded one physician at the Aguinaldo Hospital that no less than President Rodrigo Roa Duterte would be upset for what they did to the patient.

In his visit at the Gentri Doctors Hospital and Medical Center, Duque inspected some hospital rooms and briefly met with hospital officials.

He directed the hospital officials to put a set of rules on which to base data and properly identify those admitted patients injected with Dengvaxia.

He said the patients should be evaluated first before they are transferred to another hospital.

“You need good doctors, if not, you will damage your hospital,” he said.

The DOH secretary proceeded to his next leg at the General Trias Medical Center and Hospital where he met with the officials, who briefed Duque on their hospital policy.

The Gentri Medical Center officials told the Secretary that they have not rejected any patient, even the poorest.

“We have a promissory note from indigent patients that amounted to PHP13 million that were uncollected from these poor patients, but they were not rejected by our hospital,” they said.

An official of the hospital recalled that the victim’s mother who inquired from a blood bank or blood station for her daughter’s blood transfusion. After finding out that there was no available blood type, the mother voluntarily transferred her daughter to Pagamutang Bayan ng Dasmarinas.

Duque then proceeded to the Pagamutang Bayan ng Dasmarinas, where he was welcomed by Dasmariñas City Mayor Elpidio “PD” Barzaga who told him that the hospital was neither a national government-run nor a private hospital.

“This hospital is the hospital of residents of Dasmarinas City and do not receive m any external funding but from the people of Dasmarinas,” Barzaga said.

The mayor added that contrary to the mother’s claim that the hospital refused to admit her ailing daughter, “the mother was aware of the hospital policy and that they were not residents of this City.”

The secretary and the media convoy made their last stop at the Dela Salle University Medical Center Hospital in Dasmarinas City where Brother Augustine Bouger, president of the Dela Salle-Health Science Institute was on hand to receive the DOH chief.

Dr. Patricia Cantimbuhan, a pediatrician and one of the doctors of the Dela Salle Medical Center, who treated the victim, confirmed that Riceza was admitted at the hospital, underwent treatment, given dextrose while lying on her bed.

“Ginawa namin lahat para maisalba buhay niya pero after ng two hours namatay siya (we did everything to save her life, but after two hours she died of Hypovelemic or hemorrhagic shock,” Cantimbuhan said.

The attending physicians added that Riceza’s mother even thanked them for admitting her daughter and in fact treated the patient for free.

In an interview, Duque lamented several violations of some hospitals such as: the refusal to admit the patient; allegedly asking for the mother to pay for the hospital expenses; lack of or no available bed; agreement between the DOH and hospitals where they should place a signage to guide victims or Dengvaxia patients where they would be admitted; and the evaluation of the patient to determine if he/she has shown symptoms of effects of the Dengvaxia vaccine.(PNA)