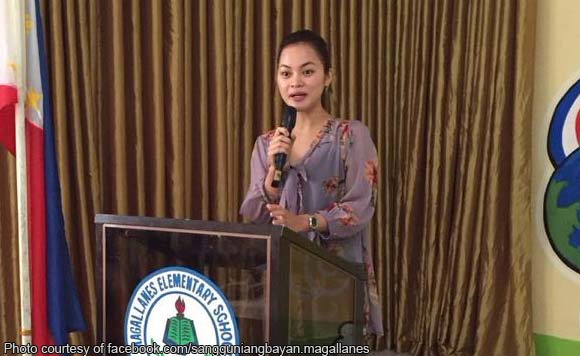 The municipality of Magallanes received P1.3 million in financial incentives for the effective implementation of the Department of Agriculture’s (DA) programs.

In her report to town constituents through her “Ulat Sa Bayan”, Mayor Angelli Maligaya-Bautista said these cash incentives were used for livelihood support projects on the raising of native pigs; goat multiplier farm; purchases for a shredder and feed mixer, animals feeds, and other veterinary medicines.

She said the municipality was cited for its various programs in the agricultural sector, which employed 82 percent of its labor force.

The population of this fourth-class town category is agriculture-based with main preoccupations in rice-farming and some shifting to coffee production due to the growing market demand.

Aside from the DA program’s incentives, the town also received P2 million for getting the Seal of Good Local Governance in 2017 by the Department of the Interior and Local Government (DILG).

She added that another P50,000 as Performance Challenge Fund was awarded by the DILG as silver awardee of the Environmental Compliance Audit in 2017.

Magallanes town was also awarded the 2017 Seal of Child-Friendly Local Eligible Municipality Governance with a rating of 89 percent.

She said the local government’s achievements during her term as local chief executive included Social Services, Management, Infrastructure and Education and Environment.

Their social services include immunization and supplementary feeding program (SFP), among others, which won for the town the “Best SFP” award under the auspices of the Department of Social Welfare and Development (DSWD) 4-A (Calabarzon).

During her first term as mayor, Bautista took pride in the completion of some P22.3 million worth of road projects and the construction of the Barangay Pacheco multi-purpose covered court worth P4.20 million.

She said the local government also completed the canal linings in four barangays; construction of barricades; gravelling works for five barangays and construction of slope protection in Barangay 1 and other rehabilitation and improvement works.

She also reported programs and projects on education and the environment and capped their accomplishments with the town declared as a “drug free” workplace after their employees tested negative during the random drug-testing.

The annual founding anniversary coincided with the celebration of its Muscovado festival to further promote its local produce and One Town One Product (OTOP) ‘Muscovado de Magallanes’.

Politiko would love to hear your views on this...
Post Views: 3
Tags: Department of Agriculture, Department of the Interior and Local Government, Mayor Angelli Maligaya-Bautista, municipality of Magallanes, One Town One Product, supplementary feeding program