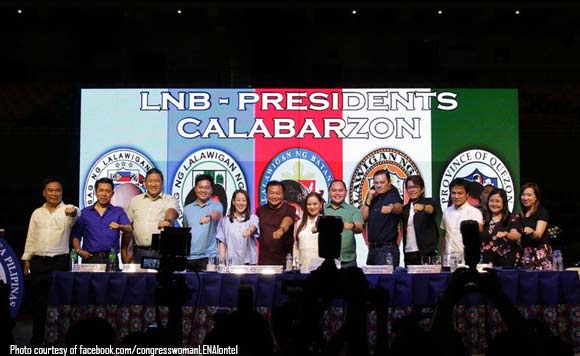 Federalism advocates no longer have to worry about mainland Southern Tagalog.

Binan Rep. Len Alonte said the Presidents of the Liga ng mga Barangay from the provinces of Cavite, Laguna, Batangas, Rizal and Quezon are 100 percent supportive of moves to shift to a federal form of government.

This was seen in the high turnout of barangay officials during a recent community mobilization program, Alonte said on Facebook.

Lawmakers may be squabbling on how to vote on charter change, but at least they won’t have to worry about one region’s support.

We’re sure this would make Tatay Digong very happy!

“January 31, 2018, the Presidents of Liga ng mga Barangay from the provinces of Cavite, Laguna, Batangas, Rizal and Quezon expressed their 100% support to the National Government’s call for Federalism. Some 4018 barangay captains and kagawads thronged the Alonte Sports Arena for the Community Mobilization Program,” Alonte posted on Facebook.