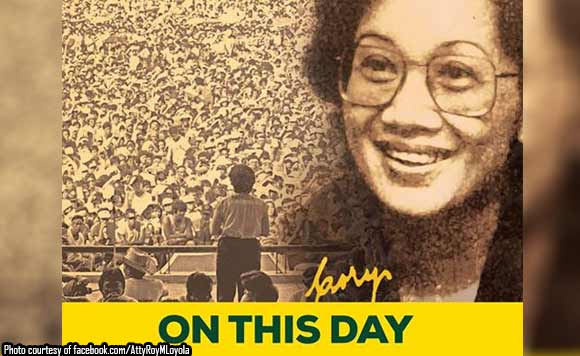 It’s been nine years since the passing of former President Corazon Aquino, but the beloved former leader is not forgotten.

Cavite Rep. Roy Loyola is one of the politikos who remembered the woman fondly called “Tita Cory” on her birthday.

She is the country’s 11th President and the first woman to hold the office. She was born in Manila in 1933.

She is best known for being at the helm of the 1986 EDSA People Power Revolution that unseated the late dictator Ferdinand Marcos and restored democracy in the Philippines.

Many may be avoiding being tagged as “dilawan” in these times, but what Corazon Aquino achieved and symbolized will never be erased.

“On January 25, 1933, Maria Corazon “Cory” Sumulong Cojuangco Aquino, the 11th President of the Philippines and the first woman to hold such office, was born in Manila.She is best remembered for leading the 1986 EDSA People Power Revolution, which toppled the authoritarian regime of the late President Ferdinand Marcos and restored democracy in the Philippines.https://kahimyang.com,” Loyola posted.