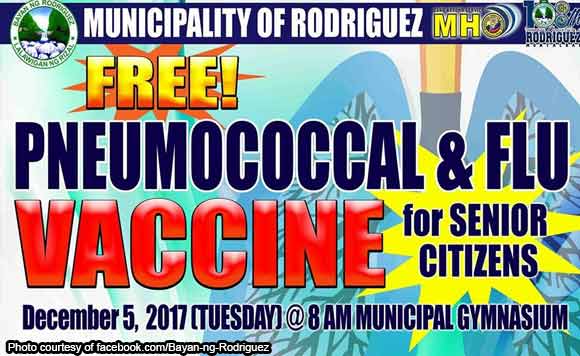 There’s a lot of fuss over the questionable dengue vaccine that the Department of Health administered to kids, but we bet there won’t be any controversy over these vaccines that Rodriguez officials are offering to senior citizens.

Under the program of Rodriguez Mayor Cecilio Hernandez and Vice Mayor Dennis Hernandez, the local government will offer free pneumococcal and flue vaccines to the elderly on December 5.

Like young children, the elderly tend to have weaker immune systems that would benefit from vaccines that could prevent them from contracting certain illnesses.

“FREE FOR SENIOR CITIZENS!!
This is on December 5- Tuesday, brought to us by our Local Government Unit under the leadership of our Mayor Cecilio C. Hernandez, Vice Mayor Dennis L. Hernandez and Sangguniang Bayan members through the Municipal Health Office,” the Rodriguez government posted on its Facebook page.