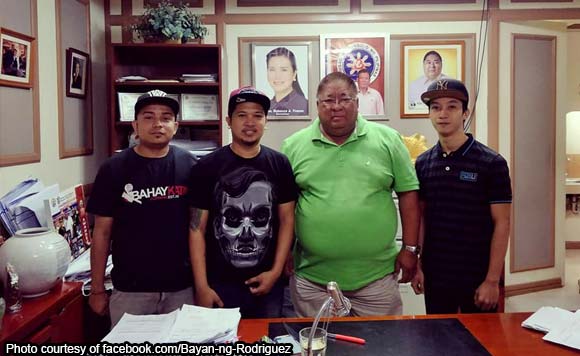 Rodriguez, Rizal officials are one in backing the administration’s campaign against illegal drugs, including the various and novel ways in which this is being waged.

One of the efforts being undertaken to steer the youth from illegal narcotics use is a rap concert scheduled on Saturday.

It has the full support of Mayor Cecilio Hernandez, Vice Mayor Dennis Hernandez, as well as the Sangguniang Panlalawigan.

Who knows, a rap song might work better than tokhang.

“Our Local Government Unit of Rodriguez headed by Mayor Cecilio C. Hernandez, Vice Mayor Dennis L. Hernandez, and the whole Sangguniang Bayan greatly supports the upcoming RAP AGAINST ILLEGAL DRUGS (RAID) CONCERT to be held on Saturday, November 25, 2017 at 3:00PM at the MUNICIPAL GYMNASIUM. The organizer – CurseBox had a courtesy call to our Mayor Elyong after the final meeting conducted for the event preparation and the LGU counterparts for this event. This is coordination witj Rodriguez Anti Drug Abuse Council, Youth and Sports Development Office and Tourism and Information Office,” the Rodriguez government posted on its Facebook page.