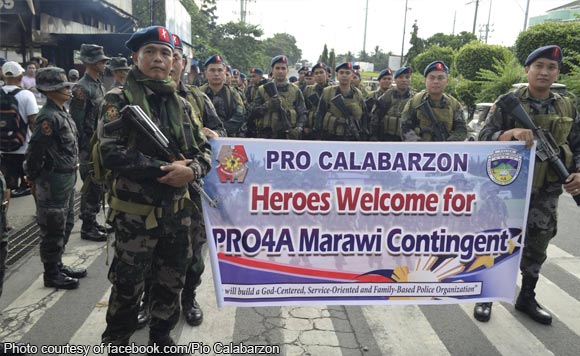 A total of 141 policemen of the Public Safety Force from the Police Regional Office in Calabarzon (PRO4A) received a grand “Heroes Welcome” at this camp on Tuesday morning after concluding their five-month deployment in Marawi City.

The ceremonial reception line of cops trooped in salute formation on both sides of Barangay Mayapa main street for the “Heroes’ March.”

The “Heroes March” started from the front street of the San Jose Trauma Hospital near the Canlubang/Mayapa interchange towards Camp General Vicente Lim for the “heroes’ welcome” program.

“We owe it to all of you for living up to the standards of PRO Calabarzon of doing the job properly without casualty, without any complaint, and without any problem,” Aplasca lauded the returning police troops.

He hailed the police contingent citing “the Police Regional Office Calabarzon and the entire community join hands in recognizing your efforts, your dedicated and unselfish service.”

“As your Regional Director, I would like to thank and congratulate all of you for this job well done and you have truly shown not only in PRO4A but in the entire PNP and the country that members of Calabarzon can be relied on, can be trusted, and are responsible to perform any mission that will be given to us by the Commander in Chief,” Aplasca stressed.

He said that the contingents served a very significant role in making sure that the entry and exit points in the Marawi battlefield were secured and the troops likewise provided public safety services like checkpoints and patrolling.

The Calabarzon regional police director also said that the event would not be the end of everyone’s journey in serving the country.

“This is just one of the many challenges we have to face in the course of our duty and in our daily lives,” he said.

“We are the Philippine National Police (PNP) which is national in scope, so that in any part of the country we are willing to serve,” Lorin said.

The contingent’s families, loved ones, friends and colleagues gave roses showing their love and support for the troops who were later feted to a ‘boodle fight’ at PRO4A covered court. (PNA)