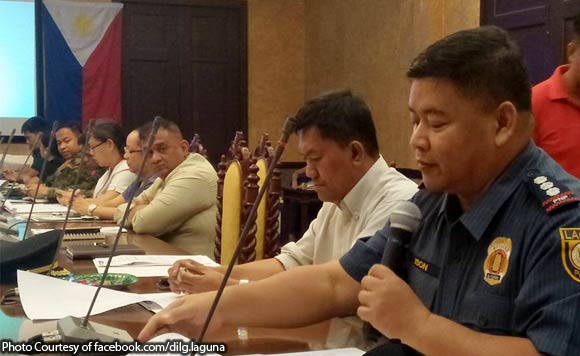 The Laguna Peace and Order Council held its fourth quarter recently, where it discussed the highlights of the province’s campaign against criminality in the first three quarters of 2017.

Acting Provincial Director PSSupt. Cecilio R. Ison., Jr. of the Laguna Police Provincial Office (LPPO) rendered that from January to September 21 this year, the break down of crime reported were: theft – 476, followed by physical injury – 370 and robbery – 181

“The LPPO continues to conduct its regular operations including the holding of Internal Security Operations and the campaign against illegal drugs. Part of its program is the internal cleansing of the organization for a better public service,” the Laguna provincial government said.

Lt. Col. Randolph Cabangbang of the Armed Forces of the Philippines reported that they have a continuing partnership with the LPPO in the conduct of Insurgency Situation Operations (ISO) and the campaign against illegal drugs as well as their anti-illegal logging operations.