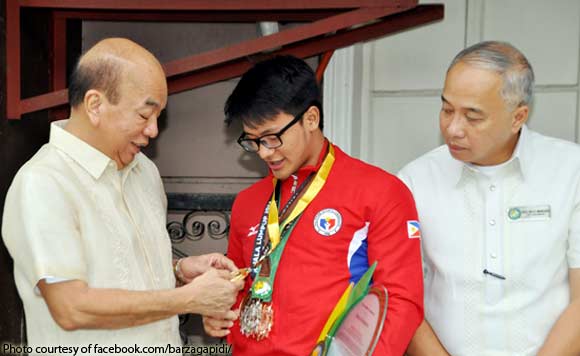 A Southeast Asian (SEA) Games gold medalist from Dasmariñas has been recognized and awarded by the city government.

Rodolfo Reyes, Jr. was recognized at the city quadrangle after the flag-raising ceremony last October 9, 2017.

Reyes is a graduate of New Era National High School and is now studying at the University of Santo Tomas.

He won a Gold Medal in Tae Kwon Do (Poomsae Team Event) of the SEA GAMES held in Kuala Lumpur, Malaysia.

Mayor Pidi Barzaga presented a plaque of recognition, medal, and and gave a cash prize of P50,000 from the City Government to Reyes.