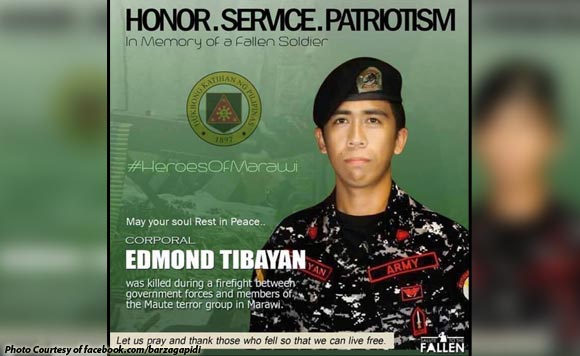 The City Government of Dasmariñas led by Mayor Pidi Barzaga recognized the heroism of its fallen son, Corporal Edmond Tibayan of the Philippine Army Scout Rangers, by giving P100,000 to the latter’s family.

A Facebook post from Barazaga bared that Tibayan, a resident of Molino Homes in Barangay Salitran 3, Dasmariñas, was slain during an encounter in Maute-infested Marawi City last July 25.

The son of a retired police officer, Tibayan was laid to rest in the hallowed Libingan ng mga Bayani (LNMB) last August 5.

A plaque of recognition was also given to Tibayan’s kin in a simple rite attended by the mayor, Cavite Rep. Jenny Barzaga and City Council members.

ISIS-inspired Maute Group terrorists occupied Marawi in Lanao del Sur on May 23. Government troops have been trying to flush them out ever since. #