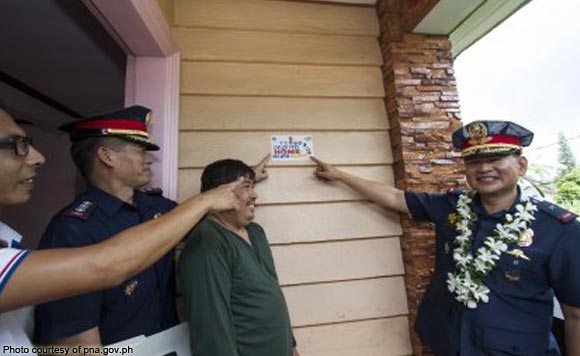 Philippine National Police (PNP) officials led the posting of “DRUG FREE HOME” stickers to households in Barangay Asisan in this city on Monday as part of the police force’s non-violent approach in its war against hard drugs in the Calabarzon region.

PNP Calabarzon Regional Director Chief Supt. MaO Aplasca and Cavite Police Director Arthur Bisnar led the sticker postings on households to indicate none of its residents are either drug users or have stopped using or selling illegal drugs.

A house declared as “drug free home” is identified through the collaborative efforts of the local Peace and Order Council (POC), barangay officials and police.

Cavite police is set to post the sticker to some 25,699 households in the 85 barangays that are certified drug-cleared by the Philippine Drug Enforcement Agency (PDEA).

This campaign in the process “will encourage those (households) who did not qualify for the sticker campaign to end their illegal activities,” said Cavite Police Communications Division Head Police Supt. Janet Arinabo.

The campaign is a take-off from the Drug Free Family campaign of PRO-Calabarzon comprising Cavite, Laguna, Batangas, Rizal and Quezon provinces and adopted on May 2015 as “Best Practice of PRO CALABARZON” through the community mobilization campaign.

Under the community mobilization campaign plan, Aplasca said included in their result targets are to bring back the sense of nationalism to the people, train community leaders and members to be more vigilant, and bring back God’s concept of family among the households and the community. (PNA)