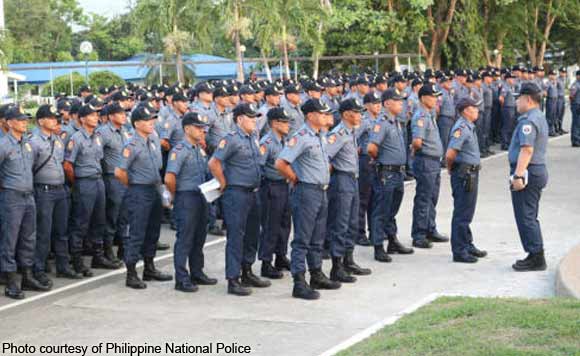 The Police Regional Office (PRO IV-A) in Calabarzon deployed on Monday 241 policemen bound for Marawi City to augment government forces in the ongoing operations against the Maute terrorist group.

Calabarzon Regional Police Director, Chief Superintendent Mao Aplasca, presided over the send-off rites at the police regional headquarters here immediately after the “humanitarian pause” in observance of “Eid al-Fitr,” a non-working holiday marking the end of the Muslim fasting month of Ramadan.

Aplasca said the police augmentation force will support the Armed Forces of the Philippines (AFP) in the combat zone.

He said the regional public safety battalion (RPSB) contingent will only focus on law enforcement functions, check points and security operations, search and rescue and other police functions.

“I want you to bring the banner of Calabarzon high. We have to defend our country. We have our sworn duty that we took when we joined this noble profession,” Aplasca said. “The mission will not be easy, but it is not impossible. We should be ready anytime, our services is needed anywhere in the Philippines.”

Aplasca also led the inspection of firearms and other equipment of the troops.

In an interview with PNA, Superintendent Chitadel Gaouiran, chief of the Police Regional Public Information Office, said the RPSB-4A contingent of 70 personnel will be the first batch scheduled to leave Tuesday by C130 plane.

Gaoiran said the other contingents will be under alert to replace the said troops after a month of deployment in Marawi City or depending on order of higher authorities.

RPSB serves as the police tactical unit because of their intensive training in urban warfare and internal security operations.

Chief Inspector Crispin Mangupag will head the contingent with nine other police officials for the RPSB troops.

Gaoiran also disclosed that the Calabarzon RPSB had previous experience in the area when they were deployed as peacekeeping force during the synchronized national and local elections in Lanao del Sur and Maguindanao where they had a successful mission. (PNA)nod