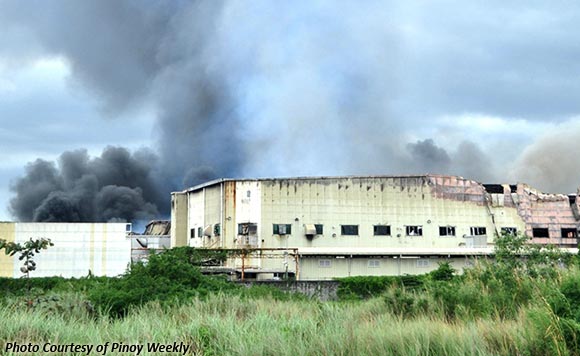 The Department of Labor and Employment has found violations of safety standards in the fire that hit the House Technology Industries (HTI) electronics firm last February.

At least five people were reported killed in the fire at HTI, whose facility is located inside the Cavite Economic Zone.

“We should revoke the certificates of compliance with the general labor standards and occupational safety and health standards of the HTI and its contractors because of the violations noted during the investigations,” DOLE Undersecretary Joel Maglunsod said.

Maglunsod, who headed the investigation team, said that HTI and its contractors violated occupational safety and health standards (OSHS) including:

– rules on training of personnel on the occupational health and environment control
– provision of personal protective equipment and devices.

Also, HTI was found to have no resting area for its workers or appropriate PPE to workers handling sharp materials and to those exposed to hazardous fumes.

The DOLE also found HTI’s contractors committed illegal wage deduction to some of its workers and failed to pay workers’ service incentive leave.

“DOLE investigation team found that HTI contractors committed illegal wage deduction to some of their employees at the time of the fire incident,” Maglunsod said.

He said HTI and its contractors should immediately pay the noted illegal deductions amounting to P10,814,427 million, as well as the workers’ service incentive leave worth P15,652,651 million.

Meanwhile, the investigation team recommended for the review of the Philippine Economic Zone Authority (PEZA) law and its implementing rules and regulations to ensure strict enforcement and compliance with the general labor standards, occupational safety and health standards, and other laws and social legislations.