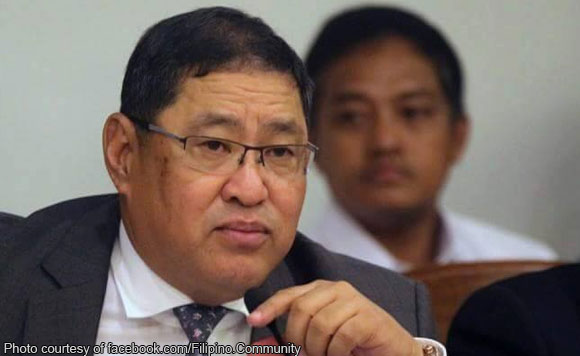 Magdalo party-list Rep. Gary Alejano has no one but himself to blame for his defeat in having the impeachment complaint he filed against President Rodrigo Duterte discussed in plenary, Oriental Mindoro Rep. Reynaldo Umali said Monday (May 15).

Umali, chair of the justice committee which tackled the impeachment complaint against Duterte, said Alejano erred in swearing that he had personal knowledge of the allegations he made against Duterte when he just based them on news reports and testimonies of self-confessed hitmen.

The panel unanimously declared the impeachment complaint against Duterte insufficient in substance but sufficient in form.

During the hearing, Alejano was grilled by Majority Floor Leader Rodolfo Fariñas on whether he had personal knowledge that Duterte was allegedly involved in the killing of drug suspects, and had amassed ill gotten wealth.

The party-list lawmaker said he based the information he cited in the complaint from Duterte’s pronouncements, news reports and the testimonies of self-confessed Davao Death Squad members Edgar Matobato and Arthur Lascañas.

Umali said the fate of Alejano’s impeachment complaint should serve as a warning to other lawmakers to be meticulous about similar cases that they may file in the future.

“Siguro next time, we would like to serve a warning to whoever will come forward na huwag ninyong sayangin ang oras ng Committee on Justice ng House of Representatives para mag file kayo ng mga complaint na walang basehan. Otherwise, whoever will file, we can sue for perjury and yung endorser, as pointed out again by the Majority Leader, can be liable for an Ethics case,” he said.