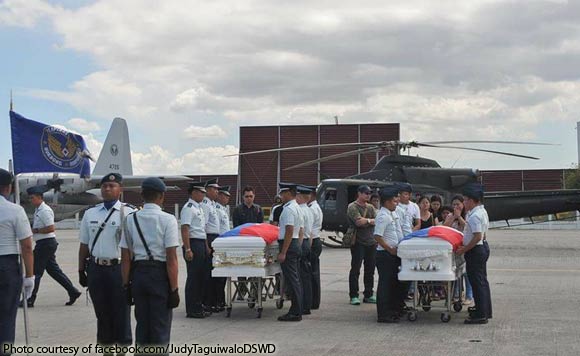 The Department of Social Welfare and Development (DSWD) is providing additional burial assistance to the three members of Philippine Air Force who died in helicopter crash in Sitio Hilltop, Sampaloc, Tanay, rizal during a disaster preparedness and response exercise last Thursday.

DSWD Secretary Judy M. Taguiwalo said Saturday that the agency was also providing medical assistance to the lone survivor, who is now confined in V. Luna Hospital in Quezon City.

Taguiwalo expressed her deep sympathy to the families of three fatalities.

“The entire DSWD leadership and staff salute the three PAF members and mourn their deaths as it happened in the conduct of their duty,” said Taguiwalo.

The Welfare Chief added that PAF had always been a strong and supportive partner of the DSWD in its disaster response actions and campaigns.

She described the value of PAF men and women in their role and commitment in assisting them on the undertakings and efforts to provide immediate assistance to Filipinos caught in emergency situations and affected by calamities.

“We salute PAF officers Christian Paul, Byron, and Joseph and thank them for their contributions to our government’s efforts to help those in immediate need of disaster relief, ” the Welfare head said.