Who is Len Alonte? Here’s what we know about the politiko tagged in P100-M bribery scandal 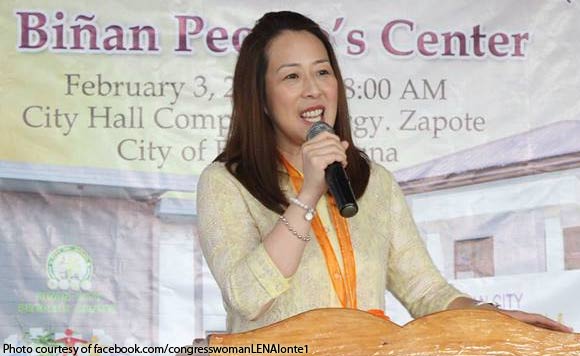 The money was supposedly a bribe for the inmates to recant their testimonies against Senator Leila de Lima.

Alonte was born into a life of privilege as the daughter of Fe Erlinda Belizario and former Biñan Municipal Mayor Arthur Alonte.

At a young age of 23, Alonte started her career as a politiko by running for councilor in 1998. She was elected vice mayor in 2004 after serving two consecutive terms in the municipal council.

In 2007, she became the youngest and first female Mayor of Biñan. She ran unopposed in 2010.

The pretty lady politiko is known to be close to celebrity Kris Aquino.

Last January, they had dinner together with two other friends to celebrate the birthday of Alonte’s husband.

From being a Liberal Party stalwart, Alonte jumped ship to PDP-Laban after she won the congressional race in Biñan in 2016.