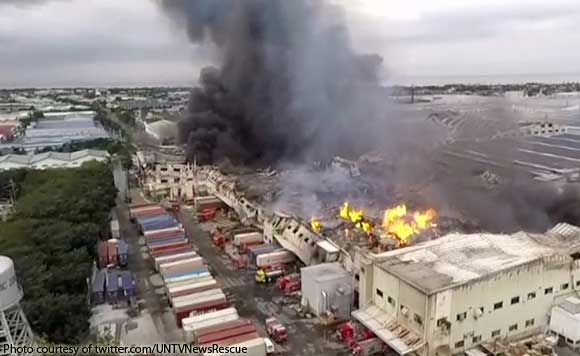 The National Fact Finding Mission (NFFM) on the massive fire that gutted the House Technology Industries (HTI) in the Cavite Export Processing Zone (CEPZ) expressed its doubts on Cavite Governor Jesus Crispin Remulla’s version on the the number of workers killed and injured in the conflagration that took place last February 1.

Official reports indicated that only one person was killed another 100 plus injured in the almost 48-hour long blaze.

NFFM spokesperson Daisy Arago said initial findings of the Quick Response Team on February 2 and the NFFM conducted on February 4 and 5, indicate there remains a public doubt on the statement issued by Cavite local government as to the number of injuries and zero casualty, prior to the death of Jerome Sismaet.

“Majority of the survivors and witnesses interviewed by the NFFM team claimed that there were more workers trapped and feared to have died inside the HTI building. Others said that they either saw or even crawled over dead bodies of co-workers as they were escaping from the burning building,” she added.

The NFFM spokesperson said this is in consonance with the testimonials of survivors interviewed by the media.

“The actual number of workers trapped and feared dead inside the building remains unconfirmed as the company, the Cavite local government unit, PEZA (Philippine Export Zone Authority), and DOLE (Department of Labor and Employment) have all failed to impart official records to the media and the public,” Arago stressed.

She also added that there is an atmosphere of fear and intimidation among HTI workers as they remain unusually silent and hesitant to speak about the circumstances of the tragedy.

The NFFM learned that HTI management asked the workers to report to one of the company building close to CEPZ Gate 5 for headcount and “orientations” on February 2, and went on until February 4.

“Survivors and witnesses affirm that they were indeed called to report. However, upon timing-in, they were told not to talk to anyone and withhold any information about the fire. A worker interviewed who claimed having photos of the fire and the bodies presumed dead being taken out of the building was instructed to erase the photos and videos from the mobile phone. Other workers corroborated this but requested complete anonymity for fear of losing jobs or any form of reprisal,” the NFFM spokesperson further disclosed

Arago said the initial findings of the NFFM suggests that there is an apparent attempt on the part of the HTI management, the PEZA and the Cavite LGU to hide the actual number of casualties and the possible occupational safety and labor standards violations.

“Having said the above, the NFFM recommends an immediate, transparent, truly independent and impartial investigation on the HTI tragedy free from intervention by the HTI management, PEZA and Cavite LGU to lend credence to the result. To the very least, the investigation must pave way for full and complete disclosure of casualties so that justice can find its course,” she concluded.