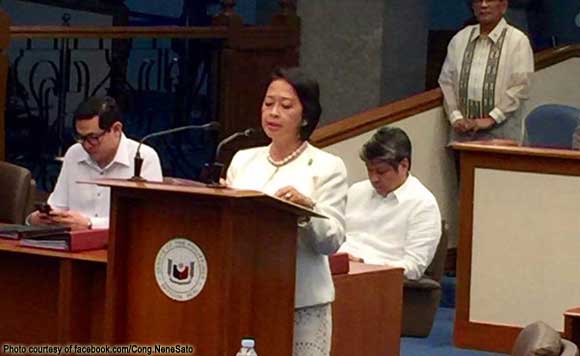 The lady politiko said signing of the IRR will ensure the implementation of the Republic Act 10879, a law that establishes the SouthWestern Tagalog Region.

As a requirement under the law, NEDA and DILG caused the IRR’s publication in newspapers of national circulation.

The MIMAROPA Act, principally authored by Sato lapsed into law on July 17, 2016.

MIMAROPA is the acronym of Mindoro, Marinduque, Romblon and Palawan.

The law bundled together as the Southwestern Tagalog Region the provinces of Occidental Mindoro, Oriental Mindoro, Marinduque, Romblon, and Palawan plus the cities of Calapan and Puerto Princesa.

With the IRR now in place, Sato hopes that the establishment of Calapan City as the Regional Center of MIMAROPA will start rolling, consistent with Executive Order 682 s. 2007 and MIMAROPA Regional Development Council (RDC) Resolution 035-196-2011 dated April 7, 2011.

“With the MIMAROPA Act and its IRR in place, we expect faster, easier and efficient government transactions in the near future,” the lady politiko added.

The IRR establishes the guidelines for the creation of the Regional Government Center (RGC) Management Committee within one month.

The RGC Management Committee shall identify the site of the RGC, cause the preparation of a master plan and oversee the activities concerning it establishment.