Check out the top snitch moments for 2016 among Luzon politikos 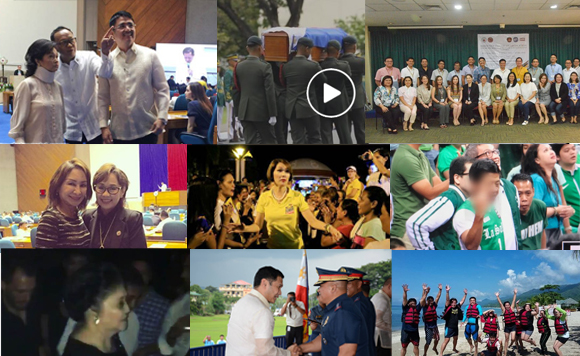 The past year has definitely been a thrilling ride for everyone, politikos included.

Politiko has rounded up the most remarkable online moments in 2016 for these men and women across Luzon.

The former president turned congresswoman is one of the biggest newsmakers this year after she finally walked free as the Supreme Court junked the plunder case alleging the misuse of P366 million in intelligence funds due to insufficient evidence last July 19.

Arroyo was even able to glam up and attend the first State of the Nation Address of new President Rodrigo Duterte at the House of Representatives with a refreshed look.

Ilocos Norte Rep. Imee Marcos
The year saw former President and dictator Ferdinand Marcos finally buried at the Libingan ng mga Bayani in a surprise and hush-hush ceremony on Nov. 18. His daughter Imee Marcos broke the Internet after she posted a same-day video edit of the historic burial, which earned the pride of loyalists and sparked outrage among critics.

After three consecutive terms as provincial governor, the Star for All Seasons successfully mounted her Congressional bid and bagged the seat during the May 9 elections. Her transfer to Batasan Complex got many other lawmakers show their inner Vilmanians as they asked for selfies with the popular actress.

The 17th Congress saw its first-ever member who was transgender woman, with Rep. Geraldine Roman actively campaigning for gender equality and anti-discrimination bills early into the sessions. Of course, she also enjoyed moments where she can flaunt her unique beauty and grace.

He may be out of politics after losing the gubernatorial race last May, but Mark Leviste found himself back on the spotlight after he was seen flashing the dirty finger against rival school Ateneo de Manila University during an intense basketball game.

Leviste, a proud La Sallian, said he was caught in the heat of the moment after a coaching staff provoked him during the first UAAP finals game this season.

Tugs tugs: Imelda Marcos knows how to party, too

While effectively keeping a low-key image, the former First Lady was caught on camera enjoying a millennial moment as she attended a party at the Revel at the Palace bar in Taguig. Partying never stops!

When Imelda Marcos went partying at Revel. I still remember that night she danced with me at Embassy. She took off her shoe, signed it and gave it to me. “Lucky are those who have shoes, and not skeletons in their closet.” #historical

The almost-Minority Leader is dead serious about his newfound role as fiscalizer and “real opposition” under the 17th Congress. Early into the new administration, Baguilat rose to Twitter fame after he supposedly beat Duterte into his plan to plant the Philippine flag at the disputed Scarborough Shoal and other islands within the South China Sea.

Turns out, he was simply fooling with his most recent banana boat ride at that time.

Pangasinan Rep. Amado Espino, Jr.
This year was definitely a roller-coaster ride for this politiko after he and his son Governor Pogi Espino were among the first ones tagged by Pres. Duterte in his “narco-list” of supposed drug trade protectors in Luzon. The politiko also got suspended by the Sandiganbayan for allegedly allowing illegal black sand mining activities in the province.

Eventually, the Espinos found redemption after Duterte himself apologized to him for the drug allegations. It’s all good now!

The former Malacañang official turned politiko has been making waves in Northern Luzon due to his fresh brand of leadership. On his first day as governor, Mamba demolished a commemorative statue of former Senator Juan Ponce Enrile at the provincial capitol.

Back in October, he also had a row with several Cagayan employees after he opted to channel what would have been their extra bonuses onto the Oplan Tulong Cagayan fund to help survivors of supertyphoon Lawin get back on their feet.

This veteran congressman rose to the ranks under the Duterte administration as he now sits as House Majority Leader. But despite the power and fame, this politiko still enjoy simple and casual meals at the Batasan canteen like he was nobody. This photo of the chamber’s bigwigs bonding at the cafeteria is simply priceless!

Quick lunch at the HOR Cafeteria with Speaker Alvarez, who was at the HOR working from 8am to 9pm yesterday. With Reps. Eric Pineda, DV Savellano, Koko Nograles, Rodel Batocabe, Dinand Hernandez and Speaker’s EA Ken Shaw.

These brothers may have facilitated the smoothest transition of all time. The popular “Gov. Pogi” stepped down from his post to give way to his older brother Boying Remulla to lead Cavite, keeping the lineage to the seat alive years after their father’s term.

Thankfully, the art of announcing class supensions also made it through the leadership change, with Boying able to pull of his own style of creative and funny announcements on Facebook and Twitter.

The President has earned hordes of haters and avid fans with his extreme actions and curse-laden speeches, but Laguna Governor Ramil Hernandez got a taste of Duterte’s kind persona. He and his wife met the President in a brief encounter, with Duterte even walking them to their car in a very humbler manner.

All her days at the city capitol made Mayor Lani Mercado-Revilla miss her husband former Senator Bong Revilla, Jr. even more. Two years since his detention at Camp Crame, the politiko resorts to hologram and 2-D images of her spouse to make it look like he’s by her side every step of the way.

This guy also rose to fame online after he personally went around town to take down his campaign posters just after the May 9 polls. The politiko rode on an Elf truck and went to literally clean up after his own mess after securing a landslide win. Kudos!

Calamba Mayor Timmy Chipeco and Imus Mayor Emmanuel Maliksi
It’s simply wonderful to send off couples to their journey to forever. These politikos proudly shared their marriage with their constituents as they posted wedding photos for the online realm to see. Kilig!

This politiko had the rare chance of being chopper buddies with Pres. Duterte after their helicopters landed roughly at the same time in Nueva Ecija. They were visiting to see the humongous drug rehabilitation facility open on Nov. 30, and Chua took the chance to bond and take a selfie with the President. He’s flying high!