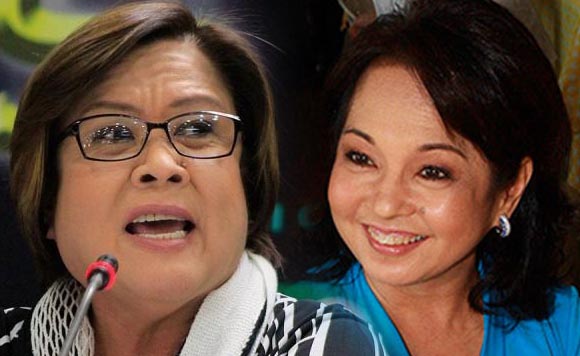 In her desperate bid to free herself from the legal entanglements caused by her implication in the alleged New Bilibid Prison (NBP) illegal drug trafficking and bribery scam, Sen. Leila De Lima is blindly lashing at anybody, even former President Gloria Macapagal-Arroyo, whom is very busy serving her constituents.

This was observed by Atty. Ferdinand Topacio, legal representative of the Pampanga 2nd Districtrict solon, in a statement released Friday, October 28.

“She blames a supposed cabal composed of President Rodrigo Duterte, former President Gloria Macapagal-Arroyo; former Senators Revilla, Estrada and Enrile, certain ‘PDAF Congressmen’ (whatever that means), and ‘a powerful religious group’ for her woes,” he added.

“The utter absurdity of her allegations is at once evident. While I cannot pretend to speak for the others pointed to by her, I must emphasize that Mrs. Arroyo is busy making up for lost time by serving her constituents and spending quality time with her family. She has better things to do than bother with a creature like De Lima, whose shenanigans will soon be her own undoing, even without any help from Mrs. Arroyo,” the lawyer further stated.

Topacio said the senator is trying to muddle the issue by finger-pointing when she should be explaining to the people why scores of witnesses – not only NBP inmates, but former subordinates, aides and colleagues in the Department of Justice – have testified clearly and emphatically under oath, that she has masterminded the transformation of the NBP into the hub of the nationwide drug trade and personal cash cow.

“Her general protestations of innocence and empty claims that the evidence are ‘fabricated’ and the witnesses ‘tortured and intimidated’ ring hollow in the face of numerous interlocking testimonies corroborated not only by each other, but by the findings of a Congressional inquiry. These vague denials are, to paraphrase Shakespeare, tales told by an idiot, full of sound and fury, signifying nothing,” he added.

Topacio also shrugged off De Lima’s claims that the Volunteers Against Crime and Corruption (VACC) is being manipulated in the attacks against her.

“The VACC headed by Mr. Dante Jimenez, which is spearheading the filing of cases against Sen. De Lima, is an 18-year old anti-crime organization pre-dating her appointment as Human Rights Chairman, Secretary of Justice and her election as Senator It is recognized the world over as a credible and impartial watchdog group beholden to no group or vested interest,” he added.

The groups’ officers, members, and legal counsels, according to Topacio, serve on a purely volunteer basis, giving their time and risking their lives, to fight crime and brings its perpetrators before the bar of justice.

In the course of its existence, it has assisted countless crime victims and filed cases against thousands of persons on the basis of solid evidence available to it, without any political agenda.

“De Lima must realize that the cases against her are not ‘payback’ from persons with axes to grind or even ‘political persecution’, but are a direct result of her official misconduct, her overweening desire for wealth, her naked political ambition, and her uncontrollable libidinous urges. She should snap out of her state of denial and face the fact that the wheels of justice may grind slowly, but it grinds exceedingly well,” Topacio concluded.