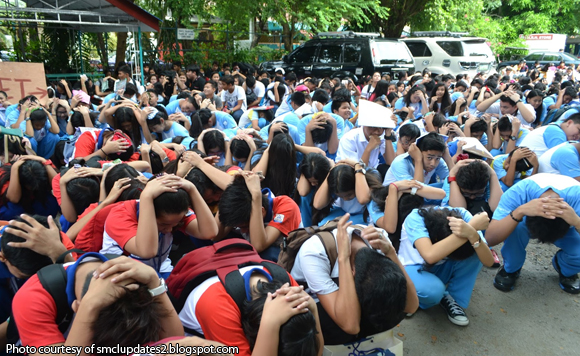 Not even the heavy rains triggered by the southwest monsoon enhanced by Typhoon “Helen” can dampened the spirits of the estimated 1,700 people who participated in the 3rd quarter Nationwide Simultaneous Earthquake Drill (NSED) held at Juana Village, Barangay San Francisco, Binan, Laguna Wednesday (September 28).

Alarm signals went off at 9 a.m., signaling the scenario for a 7.2 magnitude earthquake. After this the participants–posing as “rescuers” and “evacuees”–hurried to open grounds.

However, heavy rains then started to fall, forcing participants to seek shelter at tents which were supposed to serve as authorities’ command posts.

Despite the downpour, the drill continued and “responders” arrived to give aid and rescue “trapped residents”.
In the end, they successfully carried lifesaving drills, Philippine Institute of Volcanology and Seismology director Renato Solidum said.