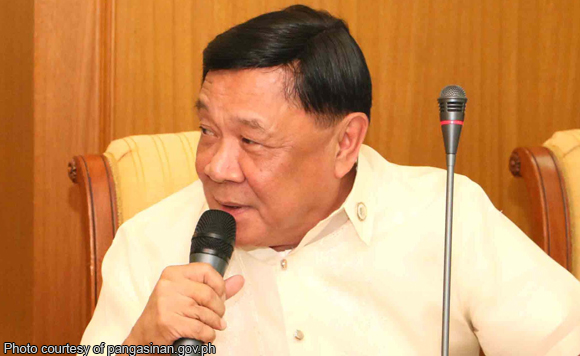 A Pangasinan politiko named by President Rodrigo Duterte in the drug matrix with Senator Leila de Lima was suspended by the Sandiganbayan for 90 days.

The September 7 decision of the Sandiganbayan granted the motion of the prosecution to cause Espino’s suspension under Section 13 of the Republic Act 3019 or the “Anti-Graft and Corrupt Practices Act,” where an accused incumbent public officer with pending criminal case involving fraud upon government or public funds or property shall be suspended from office.

The Sandiganbayan order directed Espino to cease and desist from further performing the functions, duties and privileges of his position as Congressman of the Fifth District of Pangasinan.

House Speaker Pantaleon Alvarez was given five days upon receipt of the Resolution to implement Espino’s suspension.

Espino is facing two counts of graft at the Sandiganbayan for the alleged mining and trading of black sand in Lingayen Gulf.

The Ombudsman charged that then governor Espino permitted the extraction of P10.750 million worth of mineral ore by unqualified contractors and exported the same to China in 2011.

The Resolution was signed by Associated Justice Rodolfo Ponferrada as Division Chairperson and concurred by Associate Justices Oscar Herrera Jr and Karl Miranda as members.