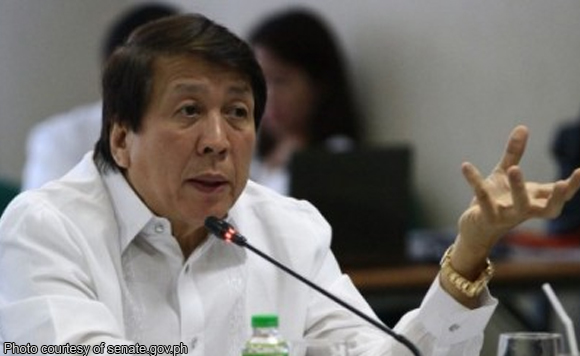 The three Commission on Elections (Comelec) commissioners who voted against granting the Liberal Party’s request to extend the filing of its statement of contributions and expenditures (SOCE) have committed a culpable violation of the Constitution because they, in effect, have added a requirement for those running for national posts, Ilocos Norte Rep. Rodolfo Fariñas said.

The incoming Majority Floor Leader, a lawyer, urged Comelec chairman Andres Bautista, and commissioners Luie Guia and Christian Robert Lim to reconsider their position on the issue lest they want to be vulnerable for impeachment.

“With due respect to the 3 COMELEC members who refuse to see the fallacy of their position in adding a requirement or qualification to the positions of President, Vice President and members of Congress, I strongly advise them to reconsider as they would be already culpably violating the Constitution,” he said.

The culpable violation of the Constitution is one of the grounds for impeachment. Comelec commissioners can be removed from their posts through impeachment.

Fariñas said the Comelec erred in imposing a deadline for filing the SOCE since it effectively added another requirement for those running for President, Vice President and Congress.

“The law simply states that any candidate (or even his political party) who fails to file it may NOT enter the functions of his office. Thus, all the candidate (and/or the political party) has to do is comply with the filing of his SOCE and he may assume his office. But the COMELEC went beyond the law, and even the Constitution, by adding a requirement to the positions of President, VP and members of Congress; that is, to file their SOCEs on a certain date. That is clearly UNCONSTITUTIONAL!” he said.

The lawmaker noted that not even the legislative branch can add to or remove any qualifications for the aforementioned national elective positions.

Voting 4-3, the Comelec on Thursday (June 16) allowed LP, as well as other parties and candidates until June 30 to file their respective SOCEs.

Those who voted to grant the extension were Commissioners Arthur Lim, Al Parreño, Sheriff Abas, and Rowena Guanzon.

Christian Robert Lim heads the Comelec campaign finance office that recommended the denial of LP’s request to extend the filing of SOCEs on the ground that allowing it will be unfair to other candidates and political parties.

Of all candidates for president, it is only LP standard bearer Mar Roxas who has yet to file his SOCE.

The ruling party, meanwhile, submitted the document on June 14, or six days after the deadline.

To solidify his argument, Fariñas said Article VI of the Constitution is clear that the Senate and House of Representatives’ respective electoral tribunals “shall be the sole judge of all contests relating to the elections, returns and qualifications of their respective members.”

For Fariñas, the three Comelec commissioners’ decision begs the question of whether the polly body has now become the arbiter for deciding on lawmakers’ qualifications.