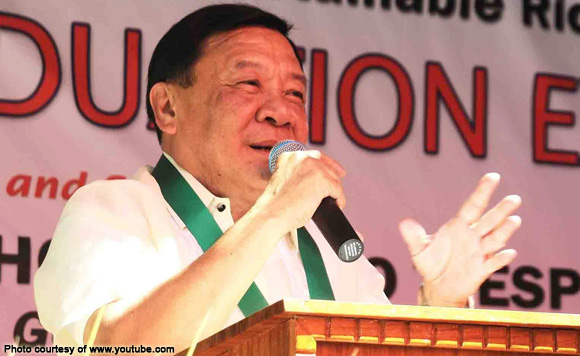 The Sandiganbayan Sixth Division has set this July 15, 2016 the arraignment of Pangasinan Governor Amado Espino Jr. and his co-accused who have charged with two counts of graft over the alleged illegal mining of black sand in the Lingayen Gulf area in 2011.

The anti-graft court set the arraignment after finding probable cause to indict them of the graft case.

In its six-page resolution dated June 14, 2016, the Sixth Division also denied the motion for judicial determination of probable cause filed by Espino which sought the dismissal of the cases.

The anti-graft court pointed told Espino that “to move the court to conduct a judicial determination of probable cause is a mere superfluity, for with or without such motion, the judge is duty-bound to personally evaluate the resolution of the public prosecutior and the supporting evidence.”

“Moreover, the arguments raised by accused-movants in their Omnibus Motion are matters of defenses that are best addressed during the trial of these cases,” the tribbunal said.

The Office of the Ombudsman which filed the cases found that both companies were not duly accredited or registered with the Philippine Contractors Accreditation Board (PCAB), did not possess the required business permit from the municipality of Lingayen, and had no clearance from the Department of Environment and Natural Resources’ Mines and Geosciences Bureau (MGB).