NPC are split between Poe and Binay in Pangasinan 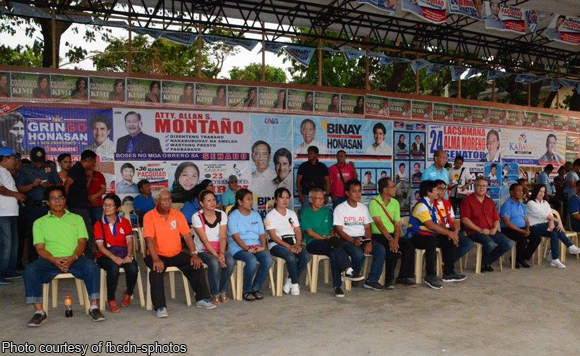 The recent pronouncements of two politikos supporting a presidential candidate different from the one announced by the national NPC leadership is a sign that the provincial leadership does not have a solid grip on its leaders.

A Politiko source said that the NPC Pangasinan Chapter headed by Mark Cojuangco was not as solid as it was perceived to be.

Pangasinan 1st district Rep. Boying Celeste and some mayors publicly showed support for Binay during a rally in Alaminos City.

The source said that NPC gubernatorial candidate Mark Cojuangco did not consult local leaders in his decision to back Jojo Binay formally in a rally at Sison, Cojuangco’s hometown.

The source said that they have not seen any of supposed surveys cited by Cojuangco as his basis for supporting Binay.

The source said that the Binay support was seen as a burden for the local politikos campaigning for Cojuangco considering that he was fighting against the group of Governor Amado Espino Jr. who himself faced graft and corruption charges at the Sandiganbayan.