Pangasinan town which gave zero votes for FPJ comes out to back Poe: Mais politics 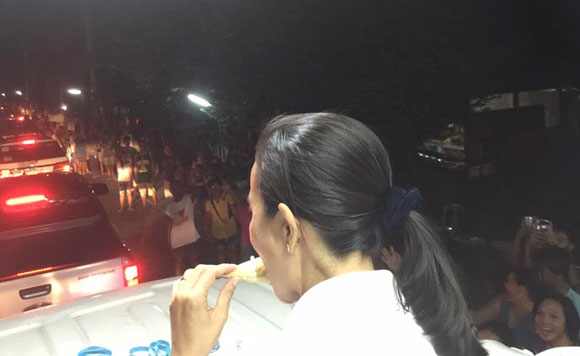 Independent presidential candidate Sen. Grace Poe ate mais (sweet corn) as she rode a motorcade through some towns of Pangasinan on 25 April 2016 which took more than 4 hours due to the volume of people that welcome her.

San Antonio punong barangay Reynaldo Valdez handed the freshly boiled corn to Poe as a pasalubong from the people of San Tomas.

Poe said ‘salamat po’ as she shared and enjoyed eating the corn ‎with the other people in the Poe mobile she was riding in.

Friends of Grace Poe chairman Rosendo So accompanied Poe on the motorcade through the towns of Malasiqui, Bayambang, Bautista, Alcala and Santo Tomas before attending a rally at the Robert Estrella Gym in Rosales.