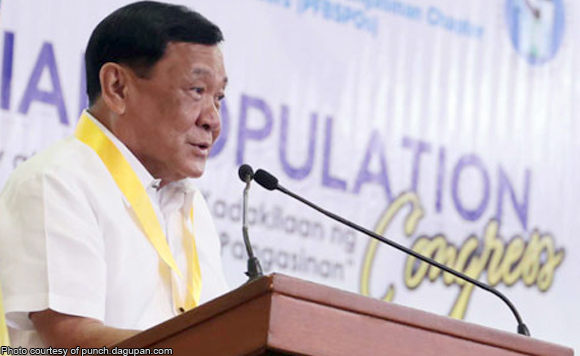 Contrary to allegations that he allowed the illegal mining of black sand, Pangasinan Governor Amado Espino claimed that he was only building a golf course along the Lingayen Gulf.

Because of this, Espina submitted an omnibus motion before the Sandiganbayan Sixth Division which it asked to dismiss the two counts of graft charged against him for allegedly allowing the illegal mining of black sand in 2011.

“These cases arose from the efforts of the Provincial Government of Pangasinan to develop a portion of the Lingayen Gulf Coast as an eco-tourism zone,” the motion read.

He said that the golf course is part of efforts started by former Governor Oscar Orbas to develop the area into an eco-tourisn zone after former President Fidel Ramos declared Lingayen Gulf as an environmentally critical area subject to regulations in 1993.

During the initial phases of the project, the politiko said soil composition analysis was conducted by the Alexandra Mining and Oil Ventures (AMOVI) which found “the presence of metallic and unwanted minerals in the soil within the site of the Golf Course Project.”

“There was no other way to grow grass on the golf course and hence, to build the golf course itself, without removing the unwanted minerals from the soil,” said Espino who recalled that AMOVI applied for a Small Scale Mining Permit (SSMP) with the provincial government for that purpose.

Eventually, the Department of Envirnment and Natural Resources-Environmental Management Bureau (DENR-EMB) put a stop to it and advised the provincial government that it should have issued a government gratuitous permit since the activity only “involves extraction and scraping off loose minerals in the soil.”

The provincial government later entered into a memorandum of agreement (MOA) with Xypher Builders Inc. to assist in the preparatory works of the golf course project and Espino assured “none of which includes the conduct of any mining-related activities.”

With the recomendations from the EMB in mind, Espina said that a gratiutous permit was granted by the provincial government to Xypher along with a Mineral Ore Export Permit (MOEP) “for the purpose of properly disposing the unwanted magnetite sand, consistent with Xypher’s obligations under the MOA.”