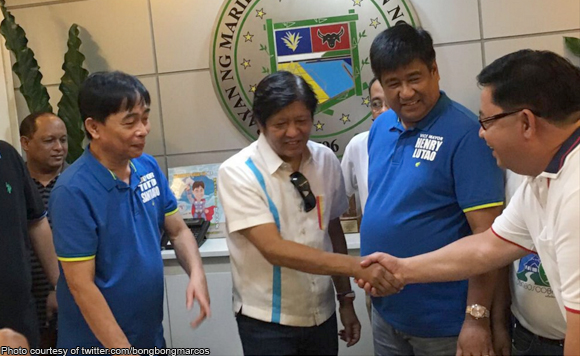 An entire local ticket in Marilao, Bulacan, formerly part of the Liberal Party, has jumped over to vice presidential bet Bongbong Marcos.

Candidate for councilor Mark Guillermo confirmed that they left the LP but he did not elaborate. He said that Marcos will have no problem in the town as far as the senator’s candidacy is concerned.

In his motorcade, Marcos was cheered on the people by with some dancing, to his campaign jingle that played continuously, while others waved his victory sign.

In Brgy. Kaypian, San Jose del Monte, Marcos called on some of the 1,000 residents who attended a forum organized by Filipino Bayan at Ako Movement and congressional candidate Rida Robes to join his crusade for national unity.