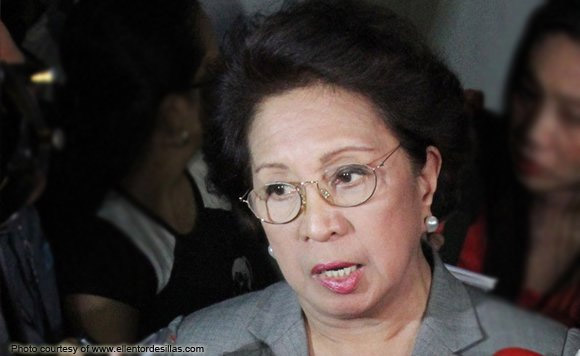 Ombudsman Conchita Carpio-Morales has ordered the dismissal from the service of Mayor Jose Villarosa of San Jose, Occidental Mindoro and two others in connection with the anomalous utilization of the municipality’s P2.9-million tobacco trust fund in 2010.

“They were ordered dismissed after they were found guilty of Grave Misconduct, Dishonesty and Conduct Prejudicial to the Best Interest of the Service,” Morales said

Besides the dismissal order, Informations for Technical Malversation and violation of Section 3(e) of the Anti-Graft and Corrupt Practices Act were slapped against Villarosa, et.al.

The Ombudsman also said that Villarosa, et. al. were also meted out the accessory penalties of perpetual disqualification from reemployment in the government service, cancellation of eligibility, and forfeiture of retirement benefits.

In case of separation from the service, the penalty is convertible to a fine equivalent to respondent’s one year salary, she said.

According to Morales, in 2010 Villarosa authorized the utilization of the tobacco trust fund to purchase 10 multi-cab vehicles, Christmas lights, meals and snacks for newly-elected barangay captains, medicines, gravel and sand, bus and vehicle rentals, all totaling P2.9million.

“Funds should be used solely for cooperative, livelihood and or agro-industrial projects that enhance the quality of agricultural products, develop alternative farming systems, or enable tobacco farmers to manage and own post-harvest enterprises,” she said.

“Respondents’ concerted acts, seen in the light of their years in public office, were certainly motivated by a clear and flagrant intent to violate the law and disregard established rules,” she added.

Morales, meanwhile, directed the secretary of the Department of the Interior and Local Government to implement the dismissal order.