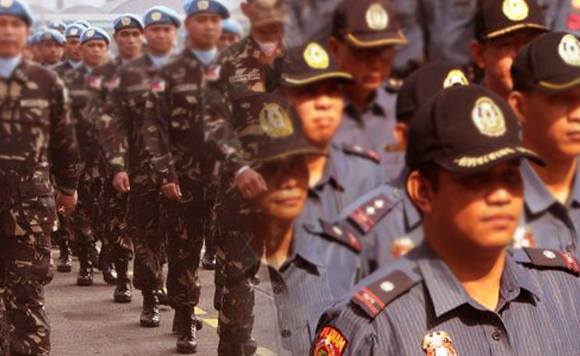 Five lawmakers are petitioning the Senate and the House of Representatives to include in the proposed salary increase of government workers the thousands of retirees and veterans from Armed Forces of the Philippines (AFP) and Philippine National Police (PNP) – like themselves.

Acop, Bataoil, and Pagdilao are retired PNP officials while Alejano and Acedillo were former commissioned officers in the AFP, all of whom stand to benefit from the increase if their proposal is granted.

The former law enforcers-turned-lawmakers pointed out that the Senate and the House can still include retirees and veterans in the pay hike proposal since this is still awaiting final approval.

Only the House of Representatives has so far approved the measure.

“Their inclusion is a sign of appreciation and respect to them for risking their lives to protect the country,” the group of lawmakers said in a Philippine Star report.

The former PNP and AFP officers said the omission of the retired military and uniformed personnel from the coverage of the proposed Salary Standardization Law “ discredits the sacrifices made by our veterans and retirees who have spent almost half of their lives as guardians of peace and protectors of democracy.”

They cited Section 11 of the proposed law that suspends the indexation of retirees’ and veterans’ pension to the salaries of those in the active service pending the passage of a pension reform law establishing a sustainable and just pension system for former military and police personnel.

They said it is unfair that the suspension of the indexation of pension benefits for military and police retirees be based on the passage of a pension reform law, which has not yet been filed for the consideration of Congress.

“As representatives of the people, it is high time that we stand up in behalf of our veterans and retired military and uniformed personnel to show our utmost appreciation and respect to them for risking their lives to protect our country,” the lawmakers stressed,

In presenting the proposed SSL 2015 to Congress, the Department of Budget and Management (DBM) did not include AFP and PNP retirees in the planned salary adjustment, apparently because it would bloat the already huge amount of public funds the program would entail.