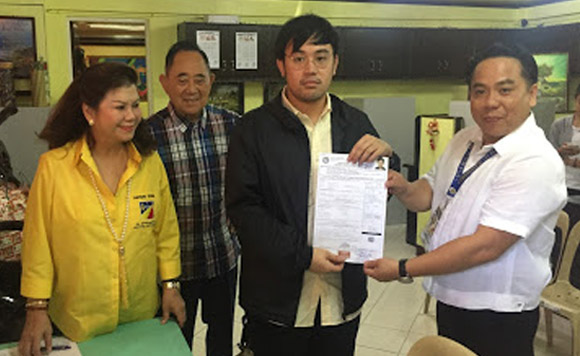 The son former House Speaker Jose “Joe” De Venecia wants to be a politiko too as he substituted for her mother, Pangasinan 4th District Rep. Gina De Venecia.

The young De Venecia said that he wants to nurture the soul of the fourth congressional district.

“My father (JDV) was the builder; my mom was the heart. I’d like to nurture the soul of our district.”

Incumbent Pangasinan 4th District Rep. Gina De Venecia who is on her second term, withdrew her COC to pave the way for her son’s candidacy for congressman under the Liberal Party.

The congresswoman said that she together with former Speaker Jose De Venecia will guide Toff in continuing the De Venecia legacy. This time it will be three-in-one type of service.

“Toff will serve the people with his style of serbisyong three-in-one wherein myself and Manong Joe will guide him every step of the way in continuing our legacy but elevating it with his style of consultative leadership and ideas that will bring the fourth district into the 21st century, she stresses,” De Venecia said.