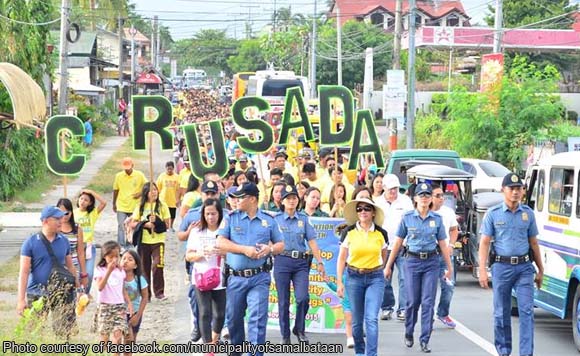 Samal, Bataan mayor Generosa “Gene” Malibiran Dela Fuente has declared war against illegal drugs. Or so she said.
Dela Fuente recently led a parade in the town to dramatize her administration’s campaign against drug traffickers in the province.

The mayor even formed a movement she called “CRUSADA”, or Crusade of Responsive and United Samalenos Against Drug Abuse.

“Drugs ruin one’s life, including the children, destroying not only the minds of the individual but also the whole family,” the town’s first elected lady mayor said in a PNA report.

During the CRUSADA parade, two big groups coming from two directions merged at the town plaza after separately making the rounds in the town’s 14 villages.

“We decided to invite more of the youth because they are more vulnerable to illegal drugs and they are the life of our town,” the mayor said.

“We will do this crusade every day with the help of all religions, the churches, to show that there is no place in Samal for drug pushers,” Dela Fuente added.

Posted by Municipal Government of Samal, Bataan on Thursday, November 19, 2015