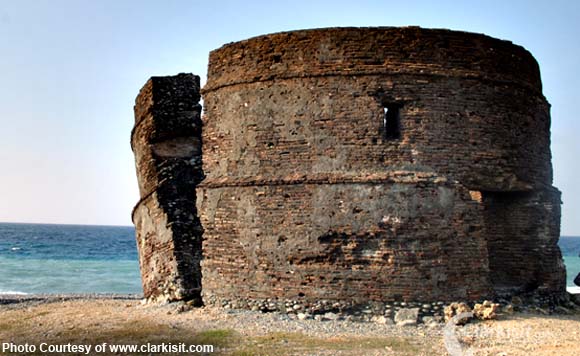 Mayor Victor Marvin Marron of Luna, La Union is calling the national government’s attention to the 400-year-old Spanish watchtower in the town’s coastline whose condition is slowly deteriorating because of natural calamities and years of neglect.

Marron said the watchtower, locally known as the “baluarte”, has been severely damaged during the onslaught of Typhoon Lando, the half part of which has already collapsed.

“We have cordoned off the ruins and put warning signs to stone collectors against getting pieces of the fallen baluarte,” the mayor said in an Inquirer article.

The municipal government, according to Marron, is doing its best to protect the ruins, including keeping the fallen pieces and chunks of rocks for future restoration.

For this effort, the town would need at least P3 million, he headed.

Located in Victoria village facing the West Philippine Sea, the 5.6-meter high watchtower was built by the Spaniards to serve as an observation post by the authorities for impending danger from the sea, such as Japanese, Chinese, and Moro pirates.

Marron said the full restoration of the historic structure would need a bigger budget, something the municipal government cannot afford.

Personnel from the National Museum has inspected the site last month, he pointed out.

As early as 2013, a consultancy firm based at the University of the Philippines (UP) in Diliman in Quezon City has conducted a feasibility study to preserve the structure.

It recommended the injection of cement slurry (a mixture of cement, sand and water) through high-pressure pumps, to fill spaces in the sand and stabilize the ground condition.

Concerned agencies, however, did not act on the recommendation until Lando came and toppled half of the baluarte, according to Marron.

“The baluarte is a national treasure and a pride of our town. I hope everything would be done to restore it,” the Luna mayor said.