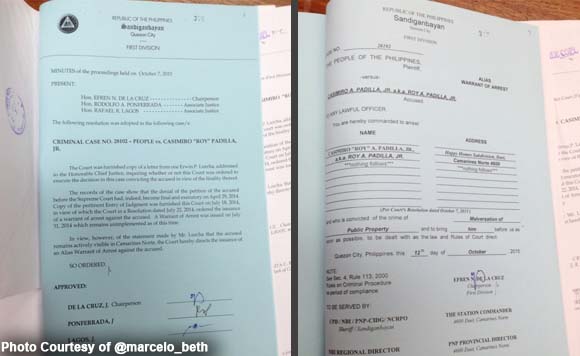 The brother of Robin Padilla convicted for possession of a missing firearm has evaded arrest and has been telling people he would run for Congress.

The Sandiganbayan First Division in 2012 convicted Padilla for his refusal to return a .45 caliber pistol issued to him as his service firearm in 1992.

Now the elder member of the Padilla family –  whose other famous member is Rustom Padilla, now transgender BB Gandanghari – remains free and has declared a congressional bid.

In a resolution, the anitgraft court First Division issued an alias warrant of arrest because the previous one issued July 31, 2014 remains unimplemented.

“A warrant of arrest was issued on July 31, 2014 which remains unimplemented as of this time. In view, however, of the statement of Mr. Erwin Lurcha that the accused remains actively visible in Camarines Norte, the Court hereby directs the issuance of an alias warrant of arrest against the accused,” the resolution read.

The court wants to arrest Padilla for his unserved sentence of four months and one day of arresto mayor as minimum to four years and two months of prision correccional as maximum.

Padilla was also perpetually disqualified from holding public office and ordered to pay a fine of P200.