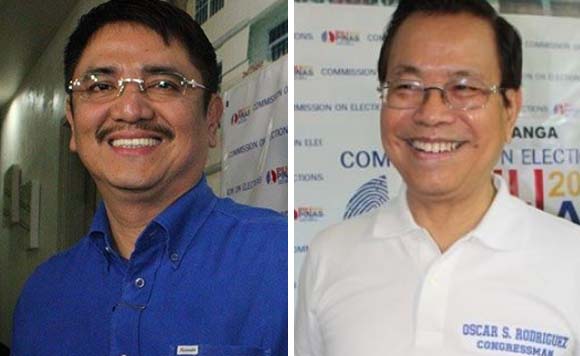 It will be a rematch between former representative Aurelio “Dong” Gonzales, Jr. and his “ninong”, incumbent Rep. Oscar Rodriguez, for the 3rd District of Pampanga.

Rodriguez is Gonzales’ wedding godfather and the duo duelled in the 2013 elections, where Gonzales lost by 30,074 votes.

Gonzales, a member of the Nationalist People’s Coalition (NPC), vowed to retake the seat his godfather took from him in the last elections.

He assured, however, that he holds no grudge against Rodriguez, who is with the Liberal Party.

“I’m all for it as I have always been for peaceful, clean and decent campaign, and it’s good that my ninong has expressed an apparent desire and support for it,” Gonzales was quoted as saying in a Sunstar article in response to Rodriguez’ call for a peaceful elections.

Gonzales said that as an elder politician, Rodriguez is expected to set the example for the younger politicians on how to run a more mature, high level and motivating campaign.

“It’s everyone’s moral responsibility and more so for the elder politicians like my ninong,” he said.

Gonzales was representative of the 3rd District from 2007 to 2013, when he and Rodriguez fought for the same post.