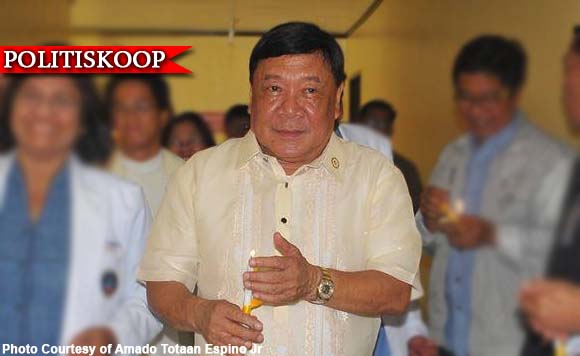 A politiko indicted by the Ombudsman for illegal mining staged Pangasinan’s first environmental summit and gave out plaques of appreciation to high officials of the Department of Environment and Natural Resources.

Environment and Natural Resources Secretary Ramon Paje was presented a plaque of appreciation by Espino.

Undersecretary for Environment and International Environmental Affairs Jonas Leones, representing Paje, said: “In Pangasinan, the government and its people have chosen to care, to act and to be responsible for their environment.”

In his speech, Espino said, “As a leader, it is my dream that the children of our children will get a chance to see the beauty of the environment.”

The Ombudsman in October 2014 indicted Espino et. al. for illegal blacksand mining and trade along the shores of the historic Lingayen Gulf.

Ombudsman Conchita Carpio Morales stated that “there is probable cause to charge respondents Espino and (Rafael) Baraan for violation of Section 3(e) of RA 3019 for authorizing unlawful magnetite extraction activities in favor of an unqualified contractor/mining company,” adding that “by reason of the precipitate and irregular issuance by respondent Espino of the export permit to China, the State lost minerals in the conservative amount of P10.7 million.”

Espino escaped dismissal from office by virtue of the Aguinaldo Doctrine where administrative charges against politikos are deemed forgiven once elected by the people.

Espino, who has pending graft and plunder cases, has filed his certificate of candidacy for congressman of the 5th district of Pangasinan to challenge incumbent Rep. Kimi Cojuangco.