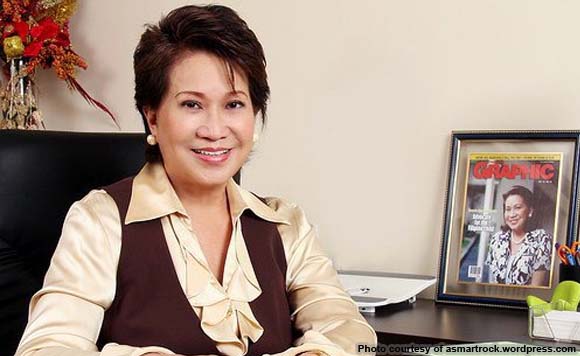 Former senator and Malabon Rep. Tessie Aquino-Oreta will be running again for the city’s lone congressional district in the 2016 elections.

Oreta, President Aquino’s aunt, will run under the banner of the Liberal Party (LP), along with her son, re-electionist mayor Antolin Oreta.

Mrs. Oreta is eyeing the seat of Rep. Josephine Veronique Lacson-Noel, who, in turn, will challenge Mayor Oreta.

Mrs. Oreta, the youngest of the Aquino children of Benigno Aquino, Sr., served as Malabon City-Navotas representative from 1987 to 1998.

She then got elected senator in 1998.

But what most people remembered about her is her infamous dance moves during the impeachment trial of former president Joseph Estrada.

After voting for the opening of the “second envelope”, Oreta was caught in camera doing a jig, which earned her the nickname “dancing queen” and offended some people.

She later apologized for the incident. Three years later, she ran for re-election but was defeated.