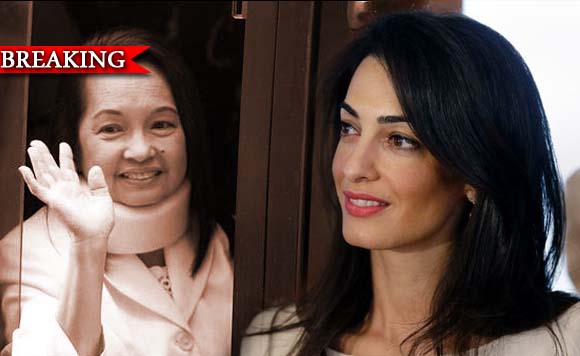 Renowned human rights lawyer Amal Clooney, who happens to be the wife of the dashing George Clooney, wants Gloria Macapagal-Arroyo released from hospital detention as she stands trial for plunder over the alleged charity funds mess.

In a press conference on Oct. 8, 2015, Arroyo’s lawyer Lorenzo Gadon said Clooney emailed him about the latest in the human rights complaint elevated before the United Nations Working Group on Arbitrary Detention on Arroyo who is represented by Clooney.

Although he cannot give to the media a copy of the UN resolution, Gadon said Clooney told him the United Working Group found Arroyo’s hospital detention illegal and arbitrary and violative of international human rights law.

The UN Group also found that Arroyo’s continuing detention for plunder a political persecution because she was prevented to continue her desire to continue serving in government. Arroyo is incumbent Pampanga representative.

“The UN opinion finds that the detention of former President Arroyo was arbitrary and illegal under international law because the Sandiganbayan court failed to take into account her individual circumstances when it repeatedly denied her bail,” according to Clooney’s email to Gadon furnished to the media.

“Further, the Working Group recognized that the charges against Mrs. Arroyo are politically motivated, since she is detained ‘as a result of the exercise of her right to take part in government and the conduct of public affairs’ and ‘because of her political… opinion,'” the email read.

Arroyo’s lawyers elevated the former president’s plight before the United Nations body, hiring only the best and the most famous lawyer to represent Arroyo for alleged politically motivated and arbitrary detention for plunder.

Arroyo is detained at the Veterans Memorial Medical Center as she faces plunder before the Sandiganbayan for allegedly using P366 million in intelligence funds of the Philippine Charity Sweepstakes Office (PCSO) from 2008 to 2010 for personal gain. She is in the hospital as she claimed to be suffering from a degenerative bone disease.