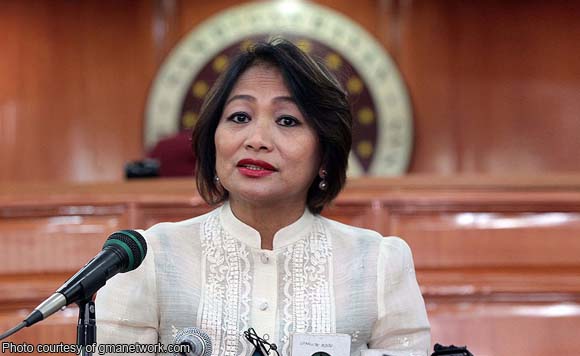 In an interview at the House of Representatives plenary debate on the judiciary budget on Oct. 8, 2015, Tang said it would take a more radical decision than the United Nations Working Group on Arbitrary Detention resolution to allow Arroyo temporary freedom.

Tang maintained that the court did not violate any international law.

She made the reaction after Arroyo’s lawyer Lorenzo Gadon said the UN Working Group found Arroyo’s hospital arrest arbitrary, illegal and a form of political persecution.

Gadon said Atty. Amal Clooney, who represented Arroyo before the UN, emailed him about the UN’s resolution favoring Arroyo.

“The UN opinion finds that the detention of former President Arroyo was arbitrary and illegal under international law because the Sandiganbayan court failed to take into account her individual circumstances when it repeatedly denied her bail,” according to Clooney’s email to Gadon furnished to the media.

“I don’t think court violated any international law, The court has always observed all the processes that are in place in the country… (Arroyo) filed the petition for bail that was heard evidence was presented and after due evaluation the court came up this its resolution,” Tang said.

“I believe the judiciousness of the members of the division. If there may be a change or radical change in the circumstances, perhaps that can serve as a ground for a change in the resolution. But if there is no significant change, I would believe that the decision will stay,” she added.

“We follow existing jurisprudence on the matter. We based our resolutions on the existing laws and jurisprudence…Our mandate is not to be influenced by any public opinion or whatever. We should base our resolution on the facts and evidences of the case, that’s all,” Dela Cruz said.