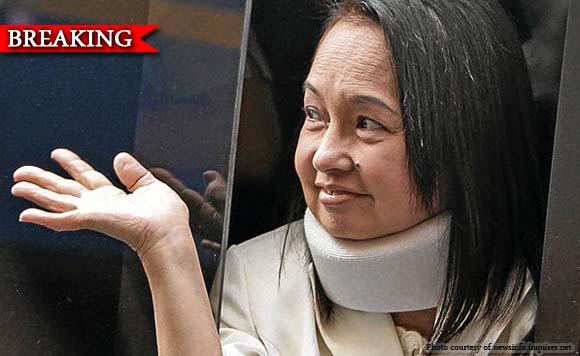 Former president and incumbent Pampanga 2nd District Rep. Gloria Macapagal-Arroyo is again asking the court to allow her to leave detention so she could undergo medical checkups for her cervical spine.

In a motion filed on October 8 before the Sandiganbayan 1st Division, Arroyo asked that that she be admitted at St. Luke’s Medical Center in Quezon City from 9 am of October 21 until 4 pm of October 22.

The former president’s lawyers assured that Arroyo will be back at the Veterans Memorial Medical Center (VMMC) in Quezon City in the afternoon of October 22.

Doctors at VMMC recommended that Arroyo undergo examinations of the nerve due to numbness and weakness of her left arm, which they said may be attributed to her previous cervical spine problem.

Arroyo is facing a plunder case for the alleged misuse of some P300 million funds of the Philippine Charity Sweepstakes Office (PCSO).