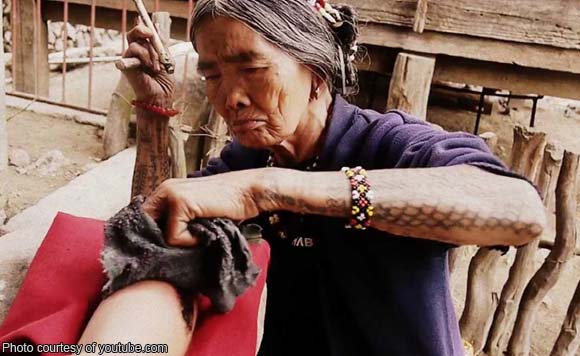 Legarda said Whang-Od should be awarded the Gawad sa Manlilikha ng Bayan (GAMABA) for her invaluable role in perpetuating the traditional art of tattooing.

“Apo Whang-Od has dedicated her whole life to her craft as she continues the art form and stands as its living archive in which she holds memory and mastery of Kalinga’s tattoo practice and its visual symbolisms that depict the province’s rituals – from childbirth, adulthood, marriage and death,” Legarda said in a statement.

The senator chairs the Senate Committee on Cultural Communities.

Were it not for Whang-Od, Legarda said “batok” or traditional tattooing in the Cordilleras would have vanished.
The 97-year-old mambabatok was featured in the Discovery television series “Tattoo Hunter” by American tattoo anthropologist Dr. Lars Krutak.

“Despite Whang-Od’s old age and dwindling eyesight, her hands are steady and rhythmic while her concentration fierce, a portrait of an artist consumed with her work,” Legarda said, adding that it is “timely and fitting” that Whang-Od be celebrated as a National Living Treasure.

Under Republic Act 7355, a Manlilikha ng Bayan is “a Filipino citizen or group of Filipino citizens engaged in any traditional art uniquely Filipino, whose distinctive skills have reached such a high level of technical and artistic excellence.”

“The awarding of the GAMABA will not only recognize Whang-Od’s role as a steward of Kalinga’s cultural heritage but will also aid her community and her apprentice in making sure that the art form be passed on from generation to generation,” Legarda pointed out.