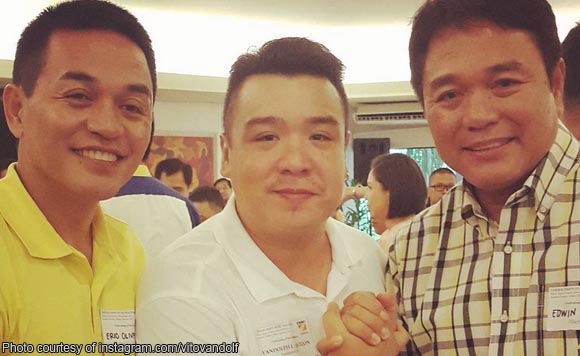 Why did actor Vandolph Quizon choose to join the Liberal Party (LP) even as his mother, incumbent Parañaque City councilor Alma Moreno is with the opposition United Nationalist Alliance (UNA)?

Not a few eyebrows were raised when Vandolph announced he will run for councilor under the LP ticket of re-electionist mayor Edwin Olivarez.

The former child actor is the son of the of the late ‘Comedy King’ Dolphy to erstwhile actress Alma Moreno.
Moreno is also the former wife of actor and former Parañaque mayor Joey Marquez.

In previous interviews, Vandolph said he joined LP because he wants Mar Roxas to win, an opinion he apparently does not share with his mother.

Vice President Jejomar Binay himself confirmed that Moreno is included in UNA’s senatorial line-up, citing the latter’s experience long experience as councilor and official of the Philippine Councilors League (PCL).

Moreno also used to be with LP and only joined UNA last year.

In 2012, she became the first female National President of the PCL.