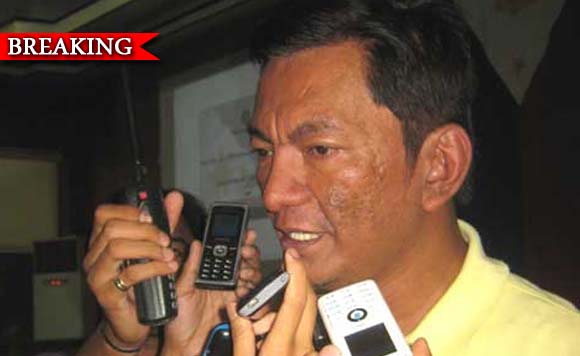 Albay officials led by Governor Joey Sarte Salceda today (12 September 2015) scored the Department of Transportation and Communication (DOTC) for causing delays in awarding the contract for the construction of the Bicol International Airport in Daraga town.

Salceda, a Liberal Party (LP) stalwart and staunch campaigner of LP presidential bet Mar Roxas, broke his silence on the Bicol Airport project upon learning that DOTC disqualified a winning bidder and was set to hold yet another bidding that would further delay the project.

“Reputable construction firms joined the bidding for the airport’s terminal building as early as January 2015. However, eight months later, it has not been awarded since the winning bidder was suddenly disqualified during post-qualification,” the governor said.

According to DOTC sources, the government could have saved between P100 million to P170-million on the P760 million terminal project if DOTC did not disqualify the winning bidder on non-existent legal grounds which appearedto be a rigid interpretation of rules and meant to favor ‎another contractor for the project.

By declaring a failed bidding, DOTC’s Bids and Awards Committee found a convenient excuse to conduct another bidding.

“This would further delay – by at least one year – the actual construction of the long-awaited Bicol International airport.

All our best-laid plans for tourism development and job creation will suffer as a consequence,” Salceda lamented. He said Secretary Abaya should personally look into the Bicol Airport bidding to ensure that the transaction is above board.

“I don’t want to think that there are favored contractors in DOTC because this doesn’t speak well of the administration’s ‘Daang Matuwid’ mantra,” he added.

“We Albayanos appeal for the immediate award and implementation of the Bicol International Airport. The bidding process has been concluded and the objective of getting the best price for the government has been achieved.

All we have to do now is to implement the project.

We’re not even sure if DOTC would get the same best price and savings during rebidding,” Salceda warned.

“I understand that the Bicol Airport is not the only major infrastructure project suffering from unjustified delays. Our people deserve better,” he said.

He stressed that the Department of Public Work and Highways (DPWH) bids out and awards projects quickly and without fanfare. “The story at DOTC is different.

The longer projects are delayed, the more opportunities for unscrupulous individuals to mulct or make money from competing bidders,” he added.

The governor said the Php4-billion Bicol Airport project started way back in 2008 when the national government recognized Albay’s potential as the next tourism and transportation hub because of its strategic location and natural attractions.

But after the runway and initial site development, construction of the terminal building hit a snag.